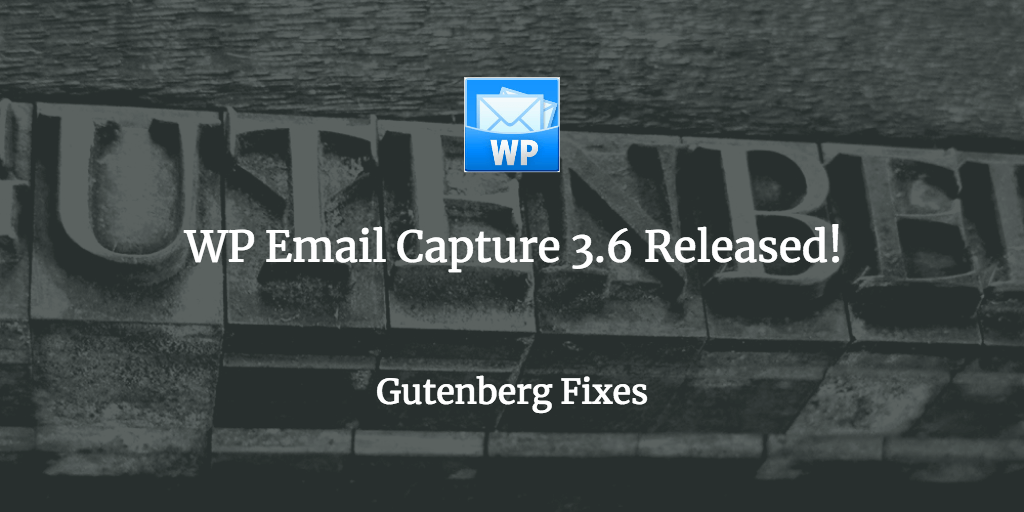 This version introduced a bunch of new Gutenberg changes, and effectively locked down WP Email Capture into Gutenberg.

In the past few versions of Gutenberg, there’s been a lot of improvements, both in terms of the code structure as well as the documentation. In short, if you had been using Gutenberg and WP Email Capture (I’d be surprised if it’s more than just myself, to be honest), it broke.

I had put a pause on development, as at the time Gutenberg wasn’t stable. It worked, but it was hard for me to maintain it (in particular with other things such as GDPR coming into focus). A few months after releasing it, and because nobody seemed to be using the Gutenberg features, I paused development on it.

Although I hadn’t received support requests, I wanted it fixed. So I’ve spent a few hours recently going through the documentation and making sure that Gutenberg works. After attending WordCamp Brighton and WordCamp Europe, as the majority of feature requests for Gutenberg had been made and completed, I decided it was a stable enough project so that I could build WP Email Capture onto it. Futhermore, the latest version of WordPress featured a call out to install Gutenberg, so I think the number of people using the new editor in WordPress will increase pretty rapidly (in fact graphs such as the one below seem to suggest that, as the below percentage growth graph seems to suggest):-

As although no real changes has been made, I’ve bumped this into a major version, as WP Email Capture 3.6 and above should work with Gutenberg 3.6.2 and above. But the main reason is that going from WP Email Capture 3.5.3 and below to 3.6 may not mean that the Gutenberg blocks will appear.

Upgrading to the premium version costs $49 for a year and entitles you to a year’s support and updates. To receive said update, please click the link below.

To be notified of updates as well as receive special offers and exclusive content, please consider signing up to our email list:-

Get the power of WP Email Capture Premium on your blog today. With Stat Tracking, multiple lists and custom templates to your email lists, WP Email Capture will soon become your new favourite Email Marketing Solution for WordPress.

This site uses Akismet to reduce spam. Learn how your comment data is processed.

Have a look at all the themes, plugins and hosting we recommend you use with WP Email Capture. Click here